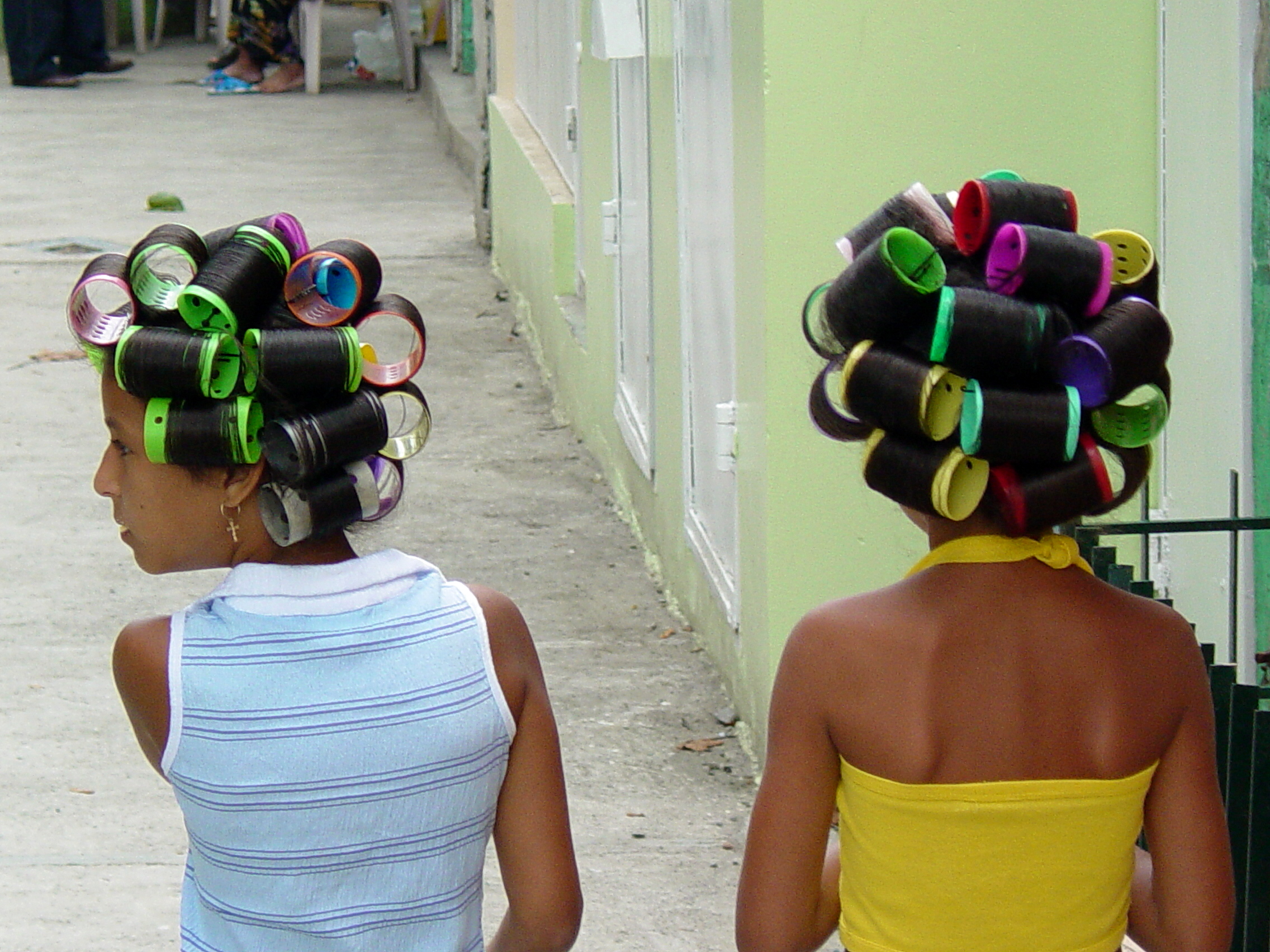 Hair straightening is a hair styling technique used since the 1890s involving the flattening and straightening of hair in order to give it a smooth, streamlined, and sleek appearance. It became very popular during the 1950s among black males and females of all races. It is accomplished using a hair iron or hot comb, chemical relaxers, Japanese hair straightening, Brazilian hair straightening, or roller set/blowdryer styling. In addition, some shampoos, conditioners, and hair gels can help to make hair temporarily straight.

The process is often called “rebonding” in some countries from Southeast Asia (e.g. Indonesia, Singapore, Malaysia and Philippines). If done often, flat irons and chemicals can be damaging to hair. Excessive straightening often results in split ends. However, heat protectant sprays can decrease the damage.

Hair irons and hot combs are designed to temporarily modify the shape/texture of hair. The straightened effect will usually be reversed by environmental factors, mainly contact with water from washing, rain, humidity, etc. This includes water in styling products such as gels applied after straightening, although careful use of such treatments can still produce usable results not much different from if the user had naturally straight hair before applying the product.

Overuse of heat tools can permanently alter the hair’s structure. This is known as “heat damage”. Use of protective sprays or lotions before heat styling may help to prevent heat damage. Once the damage has occurred, it can be disguised using various styling techniques, but not reversed. The only way to repair heat-damaged hair is to cut off the damaged hair and regrow it.

Five major tools can be used for hair straightening without any chemical treatment:

Relaxers and the other methods permanently alter the structure of the hair, although new hair growth is not affected. The drug interferon alpha has been reported as being shown to modify hair follicles causing permanent change in a person’s hair texture. Chemical hair straightening uses chemical substances to break disulfide bonds, also called an S-S bond or disulfide bridge, in the hair shaft.

There are several ways of permanently straightening hair. The main methods used today are:

a follow up procedure is done 3 days after the treatment

The Dominican Blowout includes several steps to achieve the final look of straight hair with high levels of shine, volume and movement. Typically, the first step involves shampooing the hair with a clarifying shampoo to remove all buildup. Then, hair is deep-conditioned to confer the smoothness, combability and flexibility necessary for the next steps. Stylists usually use conditioning treatments from the Dominican Republic for this process, as many Dominican manufacturers produce more concentrated formulations than conventional, Western conditioners. More concentrated formulas are necessary to protect against the intense styling used in the process and enhance the end results.

After the deep conditioner is fully rinsed out, a leave in conditioner is applied and hair is set on large magnetic rollers and placed under a hood dryer for up to 2 hours, depending on the length and density of the hair. Rollers are used to begin the straightening process and also create body and movement in the straightened style. Once the rollers are removed, concentrated silicone-based serums are applied to the hair. Oil-based products are typically avoided at this stage as they add weight and greasiness and can burn on the hair. Next, hair is blow dried straight in small sections at high heat, using a round brush to create tension and volume. A concentrator nozzle is attached to the end of the blow dryer to allow heat to be directed on the section being straightened. After blow drying, a small amount of serum is applied and hair is wrapped in a dubi or doobie, a method which wraps and pins the hair around the head, using it as a giant roller, to create additional straightening and movement. Finally, hair is taken down from the dubi and styled as desired.

The straightened Dominican Blowout look usually lasts a week, or until the next time the hair is washed. Straightness is maintained by recreating the dubi at night and covering hair with a satin scarf. Hair must not become wet or it will revert to its naturally curly state. Serum can be reapplied as needed to protect against reversion.

Hair straightening using a hot comb or relaxer has a long history among women and men of African American descent, reflected in the huge commercial success of the straightening comb popularized by Madam C. J. Walker and other hairdressers in the early 1900s. The Madam Walker System of Beauty Culture focused more on hygiene and healthy scalps and hair than hair straightening. Her vegetable shampoo and Madam Walker’s Wonderful Hair Grower (an ointment that contained sulfur) were designed to heal dandruff and severe scalp infections that were very common during a time when most Americans lacked indoor plumbing, electricity and central heating. Walker did not invent the hot comb, which was commercially available in Europe and America as early as the 1870s. While the practice has at times been a controversial issue in discussions of racial identity, visits to the hair salon have become embedded in black culture, fulfilling an important social role especially for women.